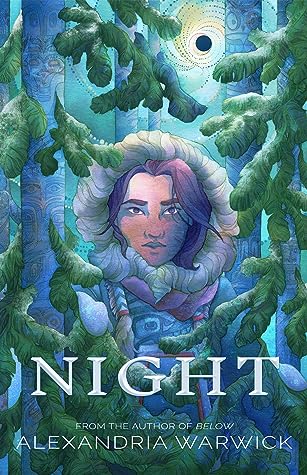 After months in captivity, Apaay managed to escape Yuki’s labyrinth with her life. But her freedom did not come without a steep cost. When the Face Stealer, the North’s most notorious demon, calls in her blood oath, Apaay must heed his demand. Debts, after all, must be repaid.

As Apaay attempts to navigate her uprooted life, something dark slithers among the snow-dusted conifers of the North. A long-dead war is unfinished, and there are those who would see it revived. In a place where misplaced loyalty could mean her death, Apaay must look inward to repair her broken soul—for if she cannot place trust in those around her, she might find enemies are closer than they appear.

In this stunning follow-up to Below, Alexandria Warwick brings the second book in her dark and seductive North series to thrilling new heights.

I was thoroughly impressed by Night. I liked the pace of this book better—I did enjoy Apaay’s struggles in Below and her iron-will but at times it was disheartening watching her experience such poignant loss over and over again. There was a lot of hurting and healing in this book and with that, comes newfound strength and revelations.

The world—I was very confused about the world/setting but this book really developed and answered any questions I may have had while reading Below. The Five Unua Clans and the War were very interesting and I cannot wait to dig deeper into the next installment.

Apaay is weighed down and haunted by the events in Below. I thought that Warwick did a great job expressing Appay’s process of guilt, her pain, and the pain that comes along with healing. It is not easy to accept help but when you are suffering and sometimes, it hurts even more when you are surrounded by loved ones because you always feel like you are disappointing them. I have suffered from mental health issues in the past and I have spurned friends and family countless times. I could totally relate to Apaay’s stubbornness and her refusal to not let people in. Even when she is reunited with her family and does give her sisters face back, it is the realization that she is no longer the same Apaay they once knew that terrifies her.

Apaay suffered a lot in Below but the fire that once kept her alive under Yuki’s clutches was noticeably absent. It hurt to see Apaay go through the challenges of letting go but it was necessary for her growth because wow, she made some stupid choices but hey—don’t we all.

I enjoyed the chapters of Ila’s perspective. The girl who lived in a cage her whole life is now desperate to learn how to stand on her two feet. She wants to know more about her past (which is wow) and learn how to fight. Also, the moments that highlight the rift between Apaay and Ila stung. Friendships do shift and grow as we go through life and I thought it was realistic for their friendship to take a turn for the worse.

The Shape Shifter is BAE. I love a man of mystery but now we learn soooo much more about him and it was well-developed. We see behind the more one-dimensional antagonist and like Apaay, we soon discover an ally we can depend on.

The War—it seems like we will get deeper into the crux of the war with the next books and I am excited!

Helping you do more and aim higher

Exploring the fault lines of the multiverse.

The Little Blog of Magic

Grace of the Sun
Daydreaming as a profession

Daydreaming and then, maybe, writing a poem about it. And that's my life.